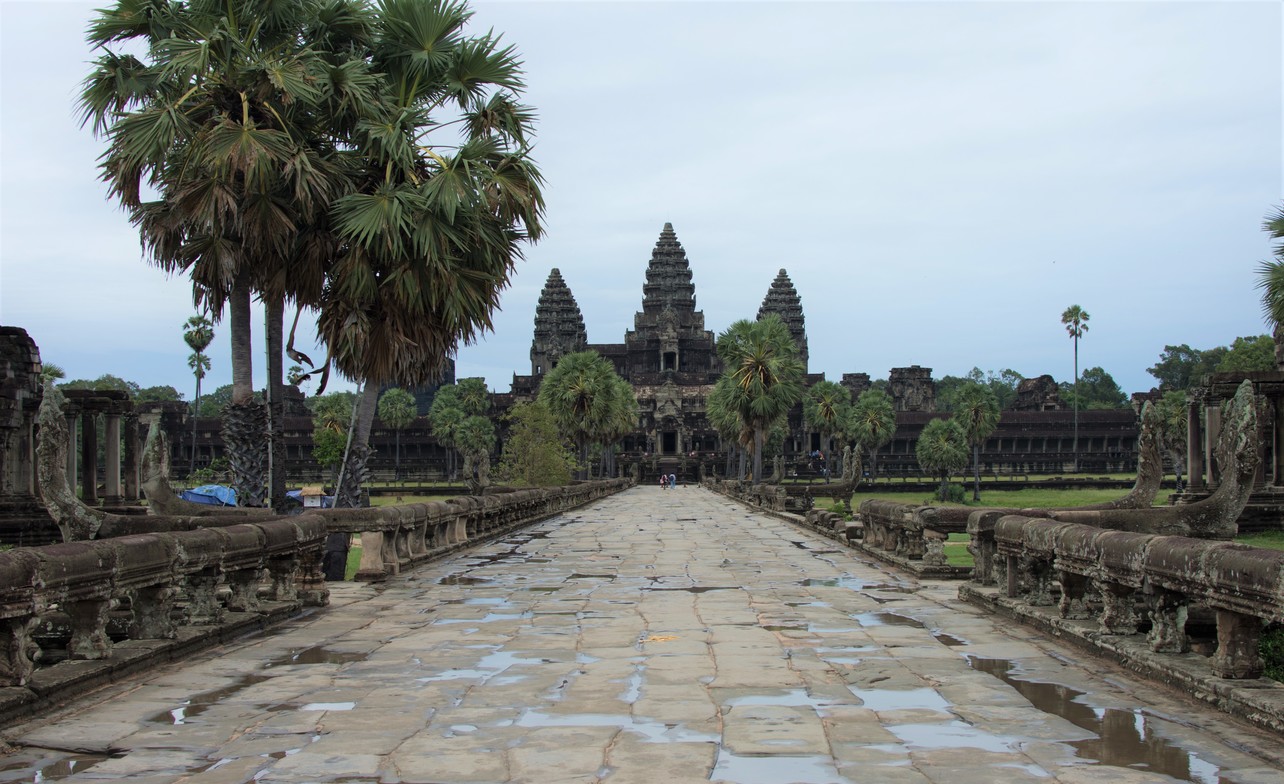 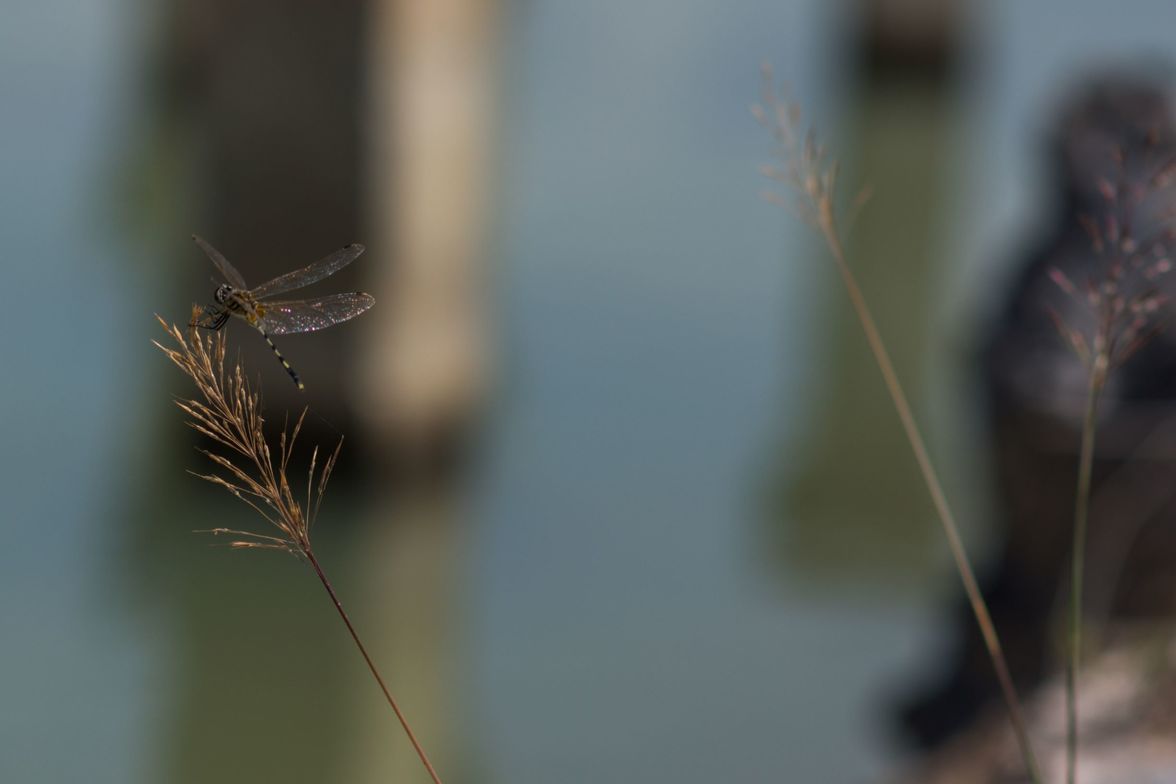 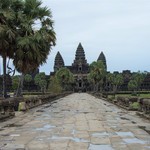 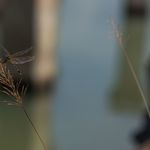 Today I woke up to Christina's eagerness to start the day, with a good morning knock on the door. While getting dressed I was reminded that we are in Siem Reap, a city located North of Phnom Penh. Siem Reap is home to the beautiful Angkor Wat temple, which is on the Cambodian flag and which has a lively night market with many things to taste and see.

As we left the guest house we stayed in, I walked alongside my good friend Julia down to breakfast. The humidity in Cambodia is something I’ll never get used to, yet today there was a slight breeze as I looked around and took in the countryside. As I did so, I found some peace which continued thanks to the cook and Reaksa's hospitality, who prepared myself and the team a fulfilling congee breakfast.

Prior to the trip, our missions team learned about Reaksa in training sessions. He’s an incredible man with an incredible life story. Reaksa was just like any other boy living in Cambodia, living a normal childhood until one day his world turned upside down.

During the Khmer Rouge, Reaksa and his family were attacked by soldiers. His family was brutally executed and Reaksa was the only one who survived the onslaught. He was bashed in the head, but still alive. After regaining consciousness he was able to climb out of a pit filled with bodies and escape.

Reaksa then escaped to Canada and learned about Christianity. In discovering Christianity's transformative teachings, Reaksa found healing and forgiveness. He then travelled back to Cambodia and tracked down his family's killers.

In his books The Tears of my Soul and After the Heavy Rain, Reaksa showed us pictures of him telling his family’s killers "I forgive you" and handing them a gift. He gifted them a shirt, a bible, and a scarf expressing sorrow. Although we briefly heard his story in our training sessions, it was still hard to hear, and hearing his story live and in-person meant even more. I could hear how authentic he was as well as every emotion in his voice.

With the day still filled with time, a few other boys and I were able to spend time with Reaksa. We were fortunate enough to go fishing with him on a riverbank not too far from where we were staying. Fishing with Reaksa taught me to have a lot of patience. Time kept ticking and I felt like we weren’t getting anywhere until suddenly my rod caught a fish. I swear I’m not the worst fisherman, but my rod’s wind-in handle literally snapped as I tried to reel in the fish. My feelings of discouragement and guilt about breaking Reaksa’s rod eventually subsided with the excitement of catching two fish for our lunch.

When the afternoon came I was fortunate enough to share a bit of my testimony with the kids of Reaksa’s camp. I told them about a time when I was living in darkness in grade ten while on my high school volleyball team. Right from the start, I was at a different skill level than the other kids on the team because I hadn't played the previous two years like the others. Because of that, I saw myself as less valuable and wasn’t confident in myself at all. However, I was diligent, attending tryouts and practicing, and was eventually accepted onto the team by the coach.

I was so excited to play because I loved volleyball, but I was wrong. I was basically neglected and it showed. I would attend games and tournaments but I was put on the sidelines for every game. If I could count how many times I’d actually been on the court the entire season, I’d say less than or around ten times. When the city championships arrived I had had enough. I found ways to distract myself by filling up teammates water bottles and did anything to remove myself from the game. I wanted our team to win so badly, but at the same time, I wanted to set foot in the finals game. Finally, as I returned to the gym I saw every person on the team rotate on and off the court. Every person got to play in the finals but me, and it felt like I was useless and didn't matter.

Feeling upset about myself I called up an important figure in my life, Remi. Remi was my old youth leader and I knew he was the right person to talk to. We met at a local Starbucks where I poured out all my bottled up emotions. I expressed to him how I felt worthless and that I didn’t matter to the team at all. I felt so broken and even embarrassed that I had cried in front of him. Then, Remi said these very words that changed my life. He said, “even though you physically can’t see God, God has and will never leave your side.” It was at this moment I felt peace for the first time in a while. It was at this moment light broke through my darkness.

Isaiah 9:2 says this, “The people who walked in darkness have seen a great light; those who dwelled in a land of deep darkness, on them a light has shone.”

I didn’t realize that in my deepest darkest times God was there, through it all. Because of Remi, I had a true encounter with God.

Being on this trip to Cambodia has really opened my eyes to a new perspective, one different from my secluded bubble back home in Vancouver. I’ve learned so much about myself, giving back and making a difference - even in the smallest ways.

Watch a video on Reaksa

Donate to the Cambodia Fund here