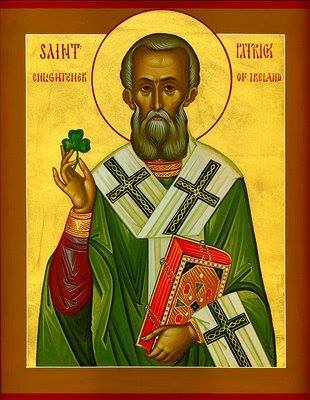 Borders to Beginings Saturday May 5

Over the next few days, you may get an invitation to join a Tenth Global private Facebook group.  Folks have expressed interest in being more closely updated on our global and local activities, so this is a way of doing that. We will be posting 3 times a week.

The life and passions of Patrick of Ireland have always inspired me. A few misconceptions: Patrick was not a saint, he was not Irish, and he did not drive snakes off the island as there were no snakes.  Find out more.

At the age of sixteen, Patrick was kidnapped from his home in present-day Scotland by Irish marauders and taken to Ireland, where he was sold as a slave to a chieftain and forced to herd livestock. After six years of slavery, Patrick escaped to his native Britain. Because he believed that his captivity and deliverance were ordained by God, Patrick devoted his life to ministry. While studying for the priesthood, he experienced recurring dreams in which he heard voices say, “O holy youth, come back to Erin and walk once more amongst us.” He convinced his superiors to let him return to Ireland in 432, not to seek revenge for injustice but to seek reconciliation and to spread his faith. Over the next thirty years, Patrick established churches and monastic communities across Ireland. When he was not engaged in the work of spreading the Christian faith, Patrick spent his time praying in his favorite places of solitude and retreat.  (Shane Claiborne - Common Prayer)

A Prayer of Patrick

Enjoy your spring, and and consider following Patrick's example of reconciliation and solitude.