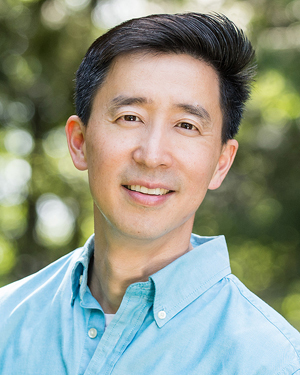 Ken arrived at Tenth as the Senior Pastor in August of 1996. Drawing on both eastern and western leadership philosophies with a penchant for risk-taking, Ken is a unique figure as a senior pastor.

An energetic and creative communication style brings his sermons to life, setting the congregation at ease while challenging them with the gospel. On any given Sunday congregants are often surprised by the props Ken uses, whether it’s a hamburger under a napkin or a music stand as a javelin.

A global thinker, Ken is honoured to serve as a trustee for World Vision Canada. Before entering full-time ministry, he worked for the Sony Corporation in Tokyo. Ken’s outward energy is fed by a deeply contemplative personal life. He enjoys reading spiritual classics and pursuing most monastic ideals.

In the summer of 2000, while travelling to Japan, Ken took some extra time to spend with his friend Sakiko Otsuka and they were married the following spring. In June 2008 they joyfully welcomed a baby boy.

They love exploring nature through sailing, hiking and the company of Sasha, their Golden Retriever. Ken received the Queen Elizabeth Diamond Jubilee Medal in 2013, which is awarded to Canadians in recognition for their outstanding contributions to the country. He also received a World Vision Ken McMillan Hero for Children Award in 2017.

Ken is the author of the award-winning, international bestseller, God in My Everything, and his most recent book Survival Guide for the Soul was named by the Word Guild as the 2019 Christian living book of the year.